A large and growing number of people earn Masters degrees in a diverse array of academic disciplines. More on those numbers at a later time, because that is very interesting in and of itself. For now, we thought it would be interesting to take a look at where this critical career step happens, using US government data.

The Masters is a specialization degree.  For the most part, students enter Masters degree programs to gain deeper knowledge and specific skills, and to sometimes engage in research. Most emerge prepared for employment at higher income levels than they might expect without a Masters, while fewer numbers use the degree to launch into a doctoral program.

It is not uncommon to run across opinions that bemoan the apparent “necessity” of the Masters, conflating that as somehow indicative of a failure of the baccalaureate student to be fully educated.  We don’t share that point of view, believing that the higher income and lower unemployment levels of Masters holders speaks for itself. This is a knowledge economy, and those with more knowledge are in higher demand.

As a first approximation, the density of Masters degree awards tracks pretty well with the population trends in the various regions.  More Masters are awarded in New York city than anywhere else in the US. But we like to think that the core driving force behind Masters degree production is not so much on the intake side but on the outflow.  These cities where Masters are produced are where demand is higher for a more knowledgeable workforce.

Some notable variances include Phoenix AZ and Minneapolis MN, which are outsized because those cities are home bases to a small group of for-profit schools. Some of the college towns with large state universities (or several schools) also produce more degrees than their population size would predict.  The latter are, presumably, exporters of Masters degree talent. 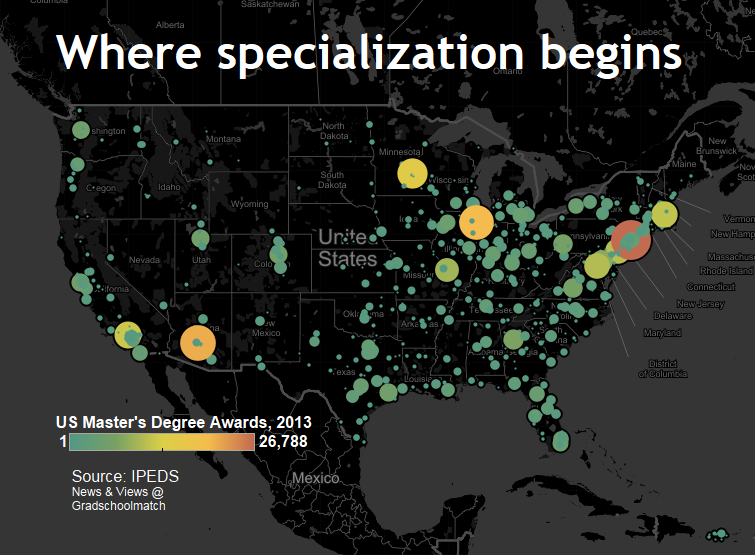 Like this article? Sign up for Gradschoolmatch blog updates, and visit us at Gradschoolmatch.com to start recruiting the best and brightest future graduate students.

[advanced_iframe securitykey=”1fe42ac1c9d04faffb1b8cac25a3b89a7d286caf” src=”https://public.tableausoftware.com/views/32012GradAwards/AwardsbyCategory?:embed=y&:showVizHome=no&:display_count=no” width=”100%” height=”960″] How many graduate degrees are awarded each year in every field? To answer that, we started first with the

Most people are surprised to learn just how many graduate degrees are awarded each year. The simplest way to remember it is that for every 2 undergraduate degrees earned, another 1 graduate degree is awarded by US colleges and universities.  And there are a