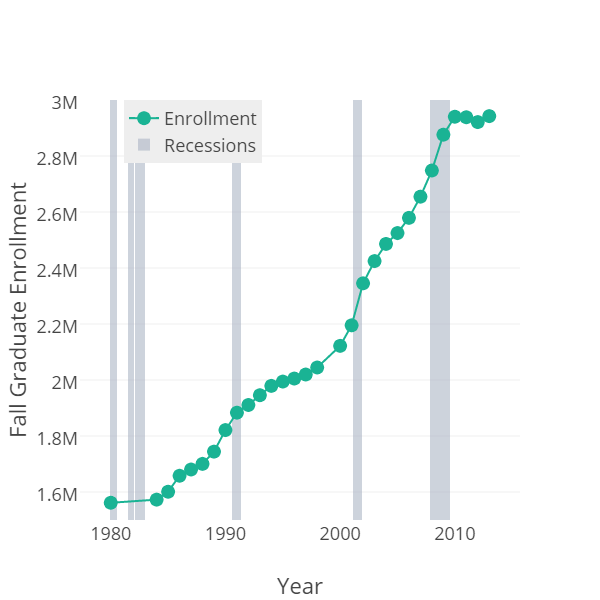 This is pretty interesting. It may be the proverbial canary in the coal mine… or it may just be regression to the mean. US graduate school enrollment has been flat since 2010, at just below 3 million heads per year. We haven’t seen anything like this over the past 30 years, a period for which we’ve enjoyed small but steady year-on-year increases. What factors might be responsible for this effect? What does it mean for graduate schools and prospective students?

First, the data. They are fall enrollment head counts from the IPEDS data center, a US Department of Education enterprise. Due to their validation process, there is a bit of a lag, such that the most recent available data is for 2103. Fall enrollment is used because the time series is longer. Another enrollment variable that IPEDS keeps, 12 month enrollment, shows that flat enrollment extends to 2014.

I’ve omitted data for the year 1999, which seem to have a wildly spurious under count relative to its neighboring years. I’ve included enrollment data for all non-profit (both public and private) and for-profit universities that award a masters or higher degree. Of the 2176 institutions in this group, enrollment data was missing for only about 50. This is a comprehensive picture because these are, in essence, anywhere that anybody goes to graduate school in the US for whatever field of specialization.

What factors might be responsible for this plateau in graduate enrollment?

Flat graduate student enrollment seems is probably due to a combination of these latter three factors, in my opinion. The demographics and loan burden suggest to me that competition between programs for outstanding students, which is always high, will prove even higher. Fewer such people are considering graduate school and the value proposition for those who do attend will need to be stronger than it appears today. We hear data points here and there from our clients in the enrollment office trenches that suggest universities have already entered a period of evaluating their programmatic needs and preparing to mothball graduate programs that cannot attract enough talent. This may be the new normal.

The flat research spending means that fewer slots are available for students. Given the extraordinarily inefficient way people go about finding their graduate school options, this could negatively impact those students seeking research experiences as either doctoral or masters students, due to increasing competition between applicants for the available resources. Such students may need to widen their application strategies to ensure they find a program that not only fits, but is likely to have the resources to carry them through.

Finally, persistent flat enrollments is probably not a good thing in the overall picture of what a thriving knowledge economy needs. There is no reason at all to believe that the US economy suffers from too many highly educated workers, given the simple observation that unemployment rates are the lowest and earnings the highest for the most highly educated. A failure to produce more workers with advanced degrees could stymie the growth of companies and industries that depend upon such highly educated talent.