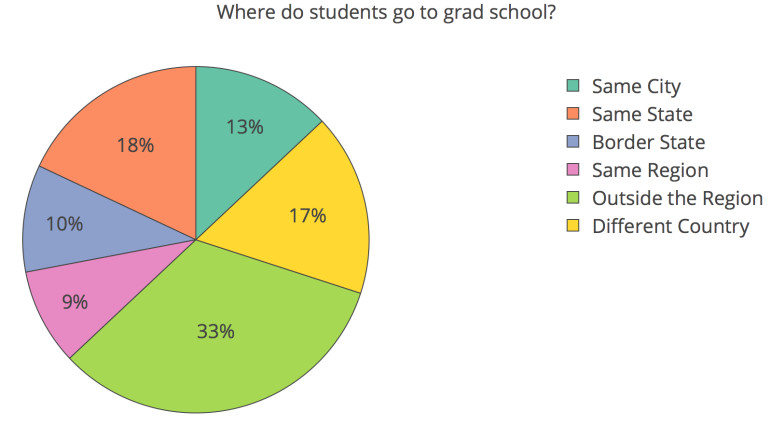 Location is an important consideration when someone decides to go to graduate school. The vast majority of graduate students, it turns out, are willing, able and make the move. In our national, randomized survey of current graduate students we asked if they had moved in order to attend graduate school. As you can see in the first figure, almost 87% of the respondents enrolled in graduate programs that required a relocation.

Half of all students reported staying within the same region of the country as their previous residence, a number that includes the 13% of students who did not relocate at all.

That half our respondents would not stray far is an interesting finding, but it doesn’t surprise us. Moving, while staying at least within the same region of one’s previous residence, is most likely a reflection of the strength of things familiar.

It may be that students want to remain close to family and friends, but we suspect it also reflects an indication of how far university “brands” are able to reach prospective graduate students. Most brands are better known in the minds of prospects who live nearby, whereas brands are probably less well known by prospects living farther away.

We did some further analysis to get a better sense of which students stay close to home compared to those who choose programs in a new city or even a new country.

Where a student chooses to go to graduate school depends on the level of degree they plan to pursue. Respondent’s location and program type are shown in the second figure.  Students pursuing Certificate and Master’s degrees tended to stay closer to home, with more than 65% of students choosing a graduate school in the same state or region as their previous residence. This number drops to about 40% for students pursuing Doctoral or Dual Degrees. 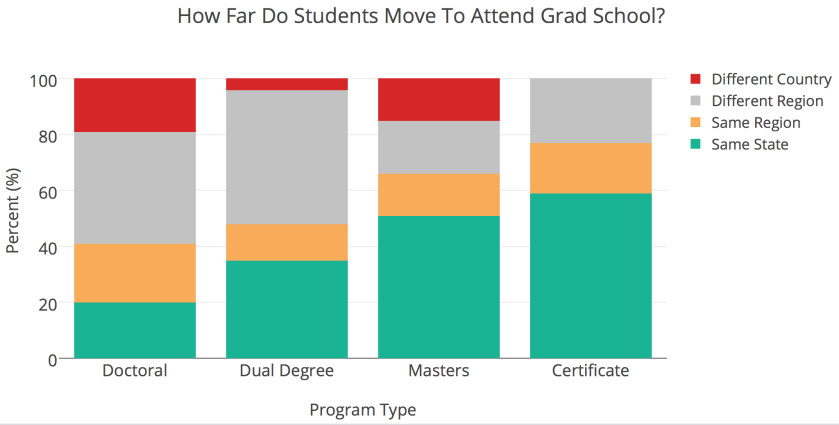 In summary, the vast majority of graduate students appear willing and able to move to enroll in graduate school. Competition for the better students who live nearby is stiff, because they apply to fewer programs and get accepted into more. These survey results indicate that to recruit more successfully, graduate programs will need a strategy to proactively reach out to prospects beyond their geographic boundaries. The data show that most students will relocate to attend graduate school. They just need to hear from programs they probably don’t even know exist.

Check out the other articles on our current graduate student survey:

Getting Into Grad School – How to Improve Your Chances

How to Choose the Right Graduate School

With March upon us graduate program admissions committees have made their decisions and have sent out their first waves of acceptance letters. If you’ve been accepted by a program, congratulations! Chances are you have more than 1 offer. Now it’s your turn

I read in the morning newspaper that the University System of Georgia is freezing college tuition rates to current levels at its public universities statewide for the 2016-2017 academic year. The legislative session is not over, but it looks to be a done deal.