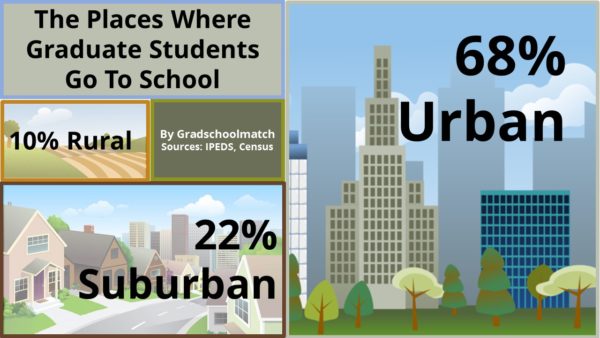 Here are a few snapshots of graduate school enrollment data I’ve been playing. All of this comes from 12 month (unique head count) enrollment data (IPEDs) and US Census population estimates by age.

First, when it comes to grad school, the real college towns are cities and their suburbs.  No surprise there, because that’s where 80% of people in the US live and work. Still, although millennials in general may or may not be drifting away from urban areas, the millennials who seek advanced degrees are certainly not. 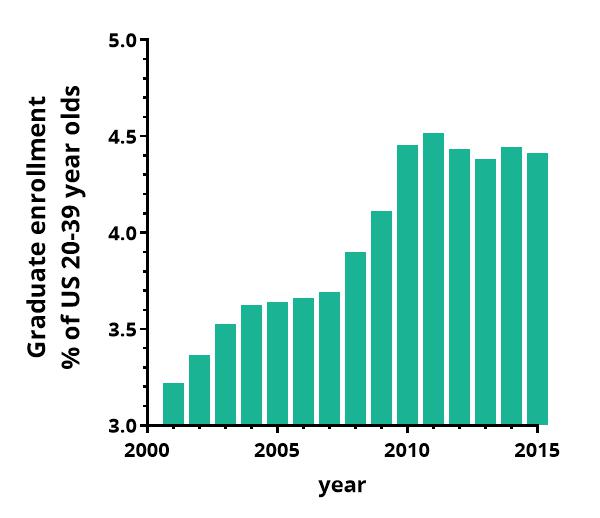 Prior to that, the fraction of people in that age range who are in grad school has been growing steadily over the past several decades (because of the increasing popularity of the master’s degree). More and more people were going to grad school. But not anymore.

For a lot of reasons, I think that 4.5% is the key number to watch, rather than absolute enrollment numbers. Why has it plateaued? Is graduate school too expensive? Too much student debt? Has the Great Recession fundamentally changed this in some way? Will graduate schools be able to increase further the percentage of baccalaureates who go on to get an advanced degree? Or is this 4.5% a “hard” cap?

I have a sneaky suspicion that most universities are built on an enrollment growth model…which is to say that attracting a growing percentage of college grads has been key to keeping tuition rates lower than they’d be otherwise. Yikes!

Individual graduate schools will struggle to hit their enrollment targets if that 4.5% fraction remains stable. Because that means competition for students will stiffen and pressures to raise tuition revenue will become stronger. 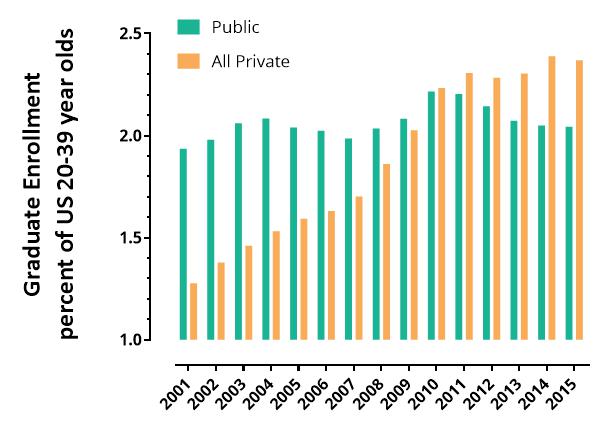 The last, if not most, remarkable story is what I like to call the privatization issue. Graduate school enrollment at private universities has caught–and clearly surpassed–that in public institutions. This turnabout is kinda stunning. The graph shows that the growth in the percentage of people enrolled in grad school over the past 15 years can be attributed mostly to private universities.

I think there are two explanations for this trend.

First, public institutions don’t spend nearly the same on student recruitment as do private institutions. This is certainly the case at the undergrad level where privates outspend the publics at a rate of about 4 to 1 in terms of recruiting one student. So there is that institutional ethos in putting some effort into marketing that differs.

But at the graduate level, recruitment is so Balkanized finding “typical” recruitment costs is difficult. The spend per student recruited is almost certainly much lower than for undergrad recruitment at both public and private institutions. That’s mostly because nobody is really in charge of it in graduate school. Graduate school deans expect programs to fend for themselves whereas programs assume the deans are helping them out with marketing and recruitment.

That’s just not something we hear a lot when chatting with private university recruiters.

A second reason for privatization is that as the cost of attending a public university has grown, the price advantage they once had over private schools has diminished, if not evaporated completely.

No one wants to make the wrong choice, right? Maybe not, but most people *don’tknow when they’re making the wrong choice.* Many grad school applicants don’t take this decision seriously enough, or realize how much will be affected by choosing the

Two recent announcements from Harvard University have generated a lot of press. Both provide important insights into the overall state of graduate education everywhere. Announcement 1: Harvard’s Graduate College of Arts and Sciences is reducing the number of slots for new graduate students