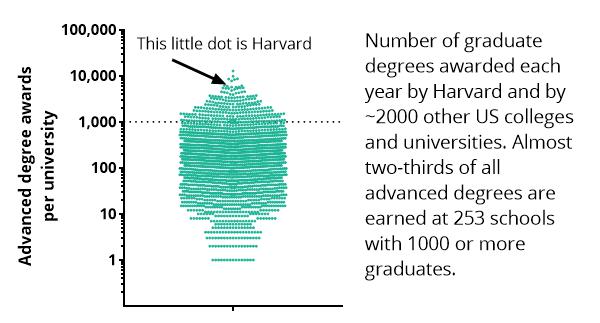 Two recent announcements from Harvard University have generated a lot of press. Both provide important insights into the overall state of graduate education everywhere.

Announcement 1: Harvard’s Graduate College of Arts and Sciences is reducing the number of slots for new graduate students by 4.4%. Funds are tight and something has to give. They explain it is better to cut new class sizes than to cut benefits and services for existing students.

Announcement 2: Harvard’s law school will now accept GRE scores in lieu of the LSAT. Harvard said, in effect, that the LSAT is an unnecessary barrier to entry for the types of applicants it would like to attract.

People are astounded that an institution with a multi-billion dollar endowment, albeit an underperforming one, is resource-constrained. Or that one of the most prestigious law schools in the country sees fit to lower barriers to entry. I don’t see any reason why we shouldn’t accept at face value the stated reasons for these changes.

Harvard is among a cluster of super-large graduate schools…there are only about a dozen universities that award more advanced degrees than Harvard. Their graduate enrollment is the size of a small town, with an intake of close to 6000 students recently. They spend a LOT of money on new grad students because they have a lot students.

Harvard’s endowment revenue supports a large number of these students, particularly the research doctorates, for at least their first two years. Most of these students are weaned off institutional money after their second year, transitioning to support by external grants, the bulk of which are federal.

The real story here is that Harvard has actually peeked around the corner to assess how available external funding will be as these students progress through the programs. Like everybody else in academia, they see some dark clouds. The admissions cut is fiscally prudent for the near term, but I think this move is mostly a hedge against the possibility of a downturn in federal support of university research, which will make it difficult to fund all the students they have already.

As for dropping the LSAT requirement, I thought it was a brilliant move by the University of Arizona when they led the way last year, and applaud Harvard for coming around to it, too.

As with the enrollment cuts, a lot of people seem to be missing the point. This has much less to do with saving students a couple of hundred bucks or the cost of a fist full of #2 pencils. This is about stimulating more applications by reducing unnecessary (and archaic) barriers to entry.

Law school enrollment is falling. The prospect pool of LSAT takers continues to shrink and with it the depth of quality. By accepting the GRE, Harvard automatically widens its prospect pool.

Harvard is seeking out non-traditionally-minded prospects. The law firm/associate model is busted and is likely not to come back, but the demand for sophisticated legal services is growing. In particular, there is a need for lawyers with backgrounds in finance, cyber, engineering, “global” and health care backgrounds. Those people are swimming in the GRE pool. And one presumes people with strong backgrounds in these areas plus a Harvard Law degree will be in good shape for employment.

To turn the corner and become relevant again law schools will need to establish two things. First, that their degrees have some value in the employment market. Second, they will need to compete in wider market for prospects, where their competition is not just other law schools, but other academic specializations potential grad students are contemplating. Harvard’s GRE move is a step to accomplish both of these.

Here are a few snapshots of graduate school enrollment data I’ve been playing. All of this comes from 12 month (unique head count) enrollment data (IPEDs) and US Census population estimates by age. First, when it comes to grad school, the real college

Most graduate schools are places where a lot of research happens, and with it research spending. It’s pretty interesting to poke around in the HERD data from time to time to take the temperature of the overall ecosystem. HERD is the National Science