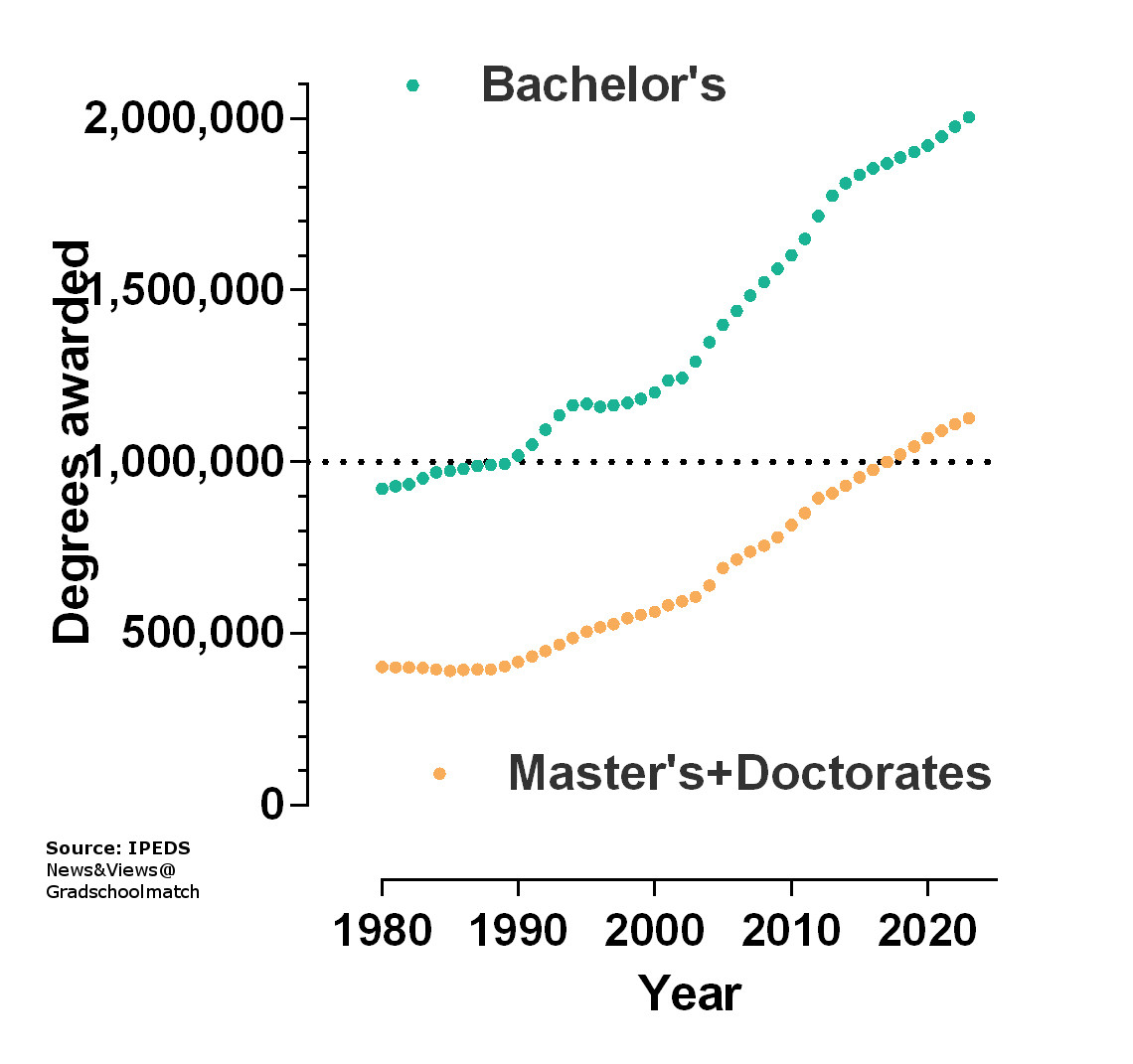 At some point in the 2017-2018 academic year,  the one-millionth graduate degree to be awarded that year will be handed to a student, along with a firm handshake by some school’s Dean. That will be a milestone event.

That person, the one-millionth graduate in the 2017-2018 year, is either in graduate school right now, perhaps working on a doctorate, or has just applied and is weighing admissions offers. Or s/he is someone who is thinking about what to study and where to apply, and will begin a graduate program later this year or early next. Gradschoolmatch intends to monitor this carefully and we have vague plans to award a Grand Prize befitting a milestone, one-in-a-million event to the lucky recipient. More on that later.

It wasn’t that long ago, in fact it happened during in the 1989-1990 academic year, that the one-millionth baccalaureate was awarded in a year for the first time.  Since then the number of baccalaureates awarded each year has grown steadily along with the growth in the number of masters and doctoral awards.

Over the past several decades the growth rate of graduate degrees awarded each year has been ever so slightly ahead of the growth rate for bachelor degree awards. Currently, about one out of every two college graduates go on to earn an advanced degree (!)  In other words, they might not realize it, but graduate school is the fate of a LOT of students…about every other bachelors degree recipient, to be more precise. Going to graduate school is a very normal thing to do.

And the projections show that in a few years, more than half of all baccalaureates will go back to grad school. At that point, we can accurately say that most baccalaureates go to graduate school. If the trend continues at its current pace, many years from now almost every baccalaureate will have earned an advanced degree, too.

The driving forces underlying these growth rates are more complex than these simple descriptive statistics.  These forces span the gamut from population trends to a high demand for highly educated workers in knowledge-based economies to a shift of training costs that employers used to bear onto the backs of their future workers, who fortunately recapture their education costs later.

Like this article? Sign up for Gradschoolmatch blog updates, and visit us at Gradschoolmatch.com to start recruiting the best and brightest future graduate students.

Whether you’re interning, studying for the GRE, or working a job back home, it’s crucial to stay competitive and on top of your game during the summer months.

[advanced_iframe securitykey=”1fe42ac1c9d04faffb1b8cac25a3b89a7d286caf” src=”https://public.tableausoftware.com/views/32012GradAwards/AwardsbyCategory?:embed=y&:showVizHome=no&:display_count=no” width=”100%” height=”960″] How many graduate degrees are awarded each year in every field? To answer that, we started first with the