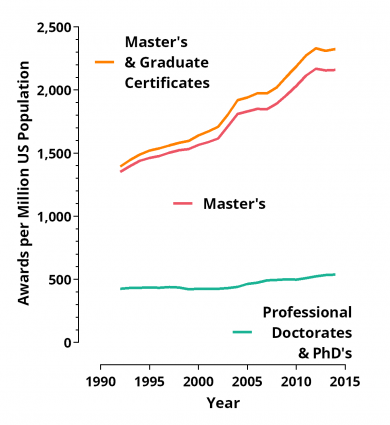 The declining levels of graduate school enrollment at non-profit US universities begs several questions. One is whether this is systemic problem or does it affect a specific graduate degree level? Since about 75% of all graduate awards each year are Master’s, declining Master’s program enrollment seems most likely to be the culprit for the 4% drop in enrollment since 2011.

It turns out, government data doesn’t break out enrollment by level of degree program, it only counts heads in school as either graduate or undergraduate. Therefore, one way to get some insight into where the impact is being felt is to look at awards data for graduate degrees, for which levels are reported.

If enrollment is dropping in Master’s degrees programs, we’d expect to see a commensurate effect on the award levels, but one that trails enrollment as the enrolled students finish their degrees but are not replaced at the old rates of matriculation.

Sure enough, for the past three years the number of Master’s degrees awarded has not dropped, but it has remained basically constant, changing 0% year-on-year since 2012. Leading up to 2011, the number of Master’s awarded had been growing at 5.2% clip year-on-year. On the accompanying chart, the end of the red line should be at the point where the existing orange line ends. This is what lost opportunity looks like.

Things never change all that fast at universities, so what we’re witnessing here is a bit like the bus hitting the proverbial brick wall while accelerating up to city street speed. Not a total calamity, but it can’t really be sustained for much longer.

The growth in doctoral awards of all kinds has not really changed much, and is moving along at about a 2.5% pace. Parenthetically, it is hard to see in the flat slope of that green doctorate curve above evidence that the US system is producing too many doctorates. We’re probably producing all that we can afford to produce given the resources.

What I think is really interesting is the relatively phenomenal growth in the awards of graduate certificates. Though fewer in number, they seem to be gaining steam. Relatively rare in the 90’s, almost 400% more were awarded in 2014 compared to 1992. In that same period Master’s awards doubled and whereas doctorates increased by about a half. Since 2011, the year of peak graduate school enrollment, certificates awards have grown at a 5.3% annual rate.

All of this very well could reflect a fundamental shift of the demand out there for the 2 to 3 year “half of a doctorate” Master’s degree. Time will tell. But it really begs the question: Have we reached peak Master’s degree? Is the Master’s value proposition diminishing? Will graduate certificates become the new Master’s?

Or is this just regression towards the mean?

See also, Are We At Peak Masters? Part 2

I just ran across yet another blog post on the internets wrongly decrying graduate school as a poor value proposition. I won’t link to it because it is mostly an uninformed polemic. Since one of the other things I do is teach statistics,