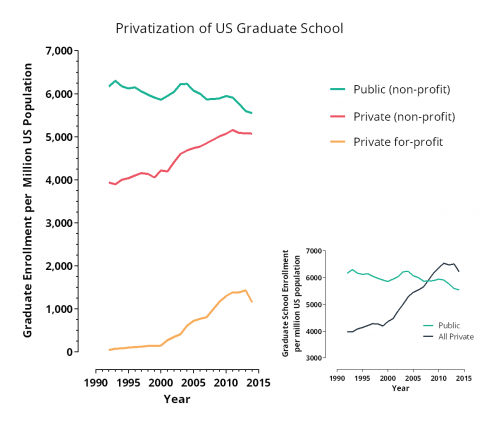 It is hard not to imaging a steal effect going on there, where the privates get students who might have otherwise enrolled in the publics. But I’m certain the causes and the effects are much more complicated than simple competition between schools.

Some responsible forces off the top of my head range from reduced state support of the publics, narrowing tuition rates between the two, to endowment growth at the privates to relative successes in growing research infrastructure and the graduate enrollment that research will drive.

Of course, ultimately these numbers reflect where students choose to attend. This just relfects the evolving marketplace for the Master’s degree. If the students hold the cards–in the end, nobody can force a student to attend someplace they don’t wish to attend–what the graduate students seem to be saying is that the graduate school value proposition at private universities and colleges exceeds that of the public institutions.

We couldn’t do our national survey of current graduate students without asking our respondents to reflect on their grad school search experience and to give some advice to the next generation of grad students on how to choose the right graduate school. Nearly